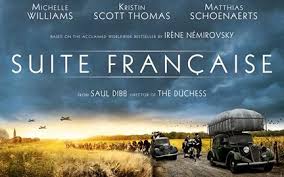 Suite Française is set in the early years of WW2 in a small village in France which has become occupied by Germans. Michelle Williams plays Lucile who’s husband is away fighting and is left living with her very strict mother-in-law Madame Angellier (Kristin Scott Thomas). When the German occupation begins their house is selected to host a Lieutenant called Bruno (Matthias Schoenaerts). Madame Angellier orders Lucile not to speak to him as a way of showing their dislike towards the situation but it is not long before intrigue takes over and Lucile and Bruno form a sort of friendship which leads to love. This relationship is subsequently tested when the realities of war come into their lives and they are forced to remember the situation they are in.

The film is based on the novel of the same name written by Irène Némirovsky, a French writer of Ukrainian-Jewish origin. In July 1942, Némirovsky was arrested as a Jew and detained at Pithiviers and then Auschwitz, where she died. The notebook containing her novel was preserved by her daughters but not examined until 1998, it was published in 2004.

I thought this film was very good. Everything from the actors to the music – especially when Bruno or Lucile were playing in scenes! – meant that there was a serious and

emotional undertone throughout that keeps you gripped and connected to the characters. Michelle Williams is fantastic as Lucile, she is instantly likeable as someone who sees her tenants struggling to pay rent and wants to help, but is trapped by her mother-in-law who feels nothing towards them. Lucile’s relationship with Bruno is tricky because for one she is married and secondly he is German, i.e. the enemy. (Also there is a massive height difference between the two! Though in close-ups of the pair together I think Michelle may have been stood on a box as it’s less of a difference…) However, Michelle really shows Lucile’s conflict as she struggles to understand her feelings towards someone she should despise, and we also see her courage and strength deepen as she is thrown into a dangerous situation.

Kristin Scott Thomas is brilliant as Lucile’s mother-in-law, she is tough with her tenants and clearly looks down on them all. You really begin to hate her character but as the film progresses we see another side to her which may change your opinion.

The film also includes a side-storyline where one of Lucile’s tenants (played by Ruth Wilson) is put in a difficult position by another (nastier) German, Lieutenant Bonnet (Tom Schilling) who takes a fancy to her. Ruth is excellent in this role you can really see her desperation at keeping her family together and safe, but not knowing how to handle the German without causing serious trouble. Tom Schilling is also very good as he makes it incredibly easy to hate his character!

Margot Robbie also makes an appearance as another tenant struggling to pay rent. She is really starting to make a name for herself after her breakout role in Wolf of Wall Street, appearing in this and also very recently Focus with Will Smith.

Overall I really liked this film, every character is played brilliantly and everything comes together to create a thought-provoking film. Like Testament of Youth it is very easy to forget what happened during the war to those left behind. During WW2 the Germans were unforgivably cruel to a lot of people, but it is easy to believe that they were all of

the same mind when that is not the case. Suite Française shows us how some Germans didn’t relish what they were made to do, a lot were just following orders and had no power over stopping their actions. This is proven by Bruno who we can clearly see is not happy in his role. Of course this doesn’t take away from the horrors that happened during that time but it does show us how it was easy for love to blossom between two opposing sides.

On a side note, when I first saw this film advertised I thought it was based on The Girl You Left Behind by Jojo Moyes, which has a similar storyline, so if you like this type of genre then definitely check out this book too!