Everyone knows the story of Cinderella, as the 1950 Disney animated film is much loved by every young girl (and possibly a few young boys too!). This year’s hotly anticipated film was the live action remake of the classic, directed by Kenneth Branagh (or Professor Lockhart to us Harry Potter geeks!) and starring Lily James (Lady Rose from Downton Abbey), Richard Madden (Robb Stark from Game of Thrones), Cate Blanchett as the evil step-mother and Helena Bonham-Carter as the Fairy Godmother.

The story follows true to the original, there are no surprising plot-twists, so if you are a fan of the fairy-tale then you won’t be disappointed. Personally I think that the live action makes the characters more real and believable compared to the animation version, making for a better film. Visually,

everything is stunning, from the locations to the costumes to the ‘magic’. There are a lot of vibrant colours in clothes, in particular with the step-sisters, contrasting with the bleak colours of the house – possibly Kenneth Branagh’s way of suggesting that the owners of the clothes don’t belong there (good to see my Degree hasn’t been worthless!). Speaking of clothes, the characters only seem to have one outfit each, until the ball where they all change, which did annoy me slightly as no one only has one outfit! However this rule doesn’t apply to Cate Blanchett who wears some fabulous pieces and completely pulls them off, leaving you in awe of her even though you’re supposed to not like her! Cate is fantastic as the evil step-mother, she brings the usual wickedness but adds a touch of emotion to the character so that when she explains why she was so mean, you almost (almost!) feel sorry for her! I found myself seeing a lot of Cruella De Vil in her character, don’t know if this was a deliberate plan of Cate’s but it helped make her character believable as a wicked person.

Helena Bonham-Carter (an absolute favourite of mine!) is great as the fairy godmother. She is very eccentric in real life and you can see this in her portrayal of the fairy godmother as her character is quirky and very funny. Unfortunately she’s not in it for very long which is a bit disappointing. The two step-sisters are played by Holliday Grainger and Sophie McShera (another Downton actress) and are both brilliant as the witless sisters who are desperate to marry into a wealthy family. They have to wear some of the most hideous dresses which helps add to their comedic element.

The two leads, Lily James and Richard Madden, are great together, you can really see the 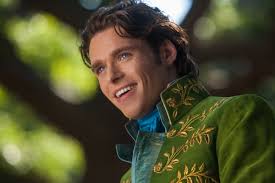 chemistry between their characters so it is easy to believe that they fall head over heels in love! Richard Madden is lovely as Prince Charming, he has the character down perfectly, however, having spent the past 4 years watching him as Robb Stark in Game of Thrones, I couldn’t quite get past the clean-shaven look. I don’t think it suits him as much as a bit of designer stubble does, so unfortunately whenever he was on screen I couldn’t help but wish he hadn’t shaved it all off! To add to that, his costume consisted of some very snug white tights, so all in all it was quite hard to concentrate when he was on screen!

Lily James may well have become a new favourite of mine after watching Cinderella. I

already liked her from Downton Abbey but in this she really brings something. You can totally see her as being Cinderella, with all the pain and suffering she goes through and yet always managing to stay positive, Lily portrays it fantastically. You will fall in love with her as Cinderella, which is what every great actress should do with a character. I think this may be the start of a fantastic career for Lily as she really is a superb actress – and of course she is absolutely gorgeous too which every Disney Princess needs to be!

Overall I really liked this live action adaptation of Cinderella. It has everything you could want from a Disney film, a great cast, the ability to make you cry and laugh within moments of each other and it is visually stunning to watch. Oh and there is even a hilarious cameo from Rob Brydon, which I was not expecting! If you’re a Disney lover then you must definitely see this film!