Didn’t make the cinema this week, so here’s my review on The Imitation Game, an excellent film! 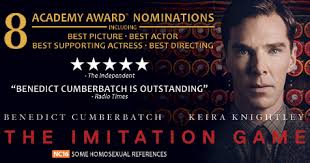 The Imitation Game follows the true story of Alan Turing, an English mathematical and logician who helped to crack the Enigma code in World War 2 and thus helped to end the war. The Enigma code was the machine that the Germans invented in order to code messages so that the enemy wouldn’t know their plans. Alan’s work in creating and building a machine that would crack this code and decipher the messages meant that many lives were saved and the war was won. However, after the war was over, Alan was found to be a homosexual, which at the time was a criminal offence and was given the option of prison or chemical castration. He chose the castration but it affected him badly and eventually led to his suicide. It is only recently, and with the making of this film, that the incredible work Alan did for our country is being recognised. 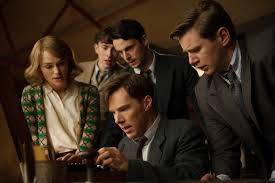 and of course Keira Knightly and Benedict Cumberbatch as the leads. Every member of the cast provides an amazing performance, but the stand out is Cumberbatch who gives us possibly his best role yet. He is absolutely amazing as Turing, proven by the fact he was nominated for numerous awards for his portrayal of Turing including a Golden Globe award and an Oscar Nomination (narrowly missing out to Eddie Redmayne!). Kiera Knightly too was nominated for a Golden Globe and an Oscar for her role as Joan Clarke, the only female on the team who has to deal with sexism on many occasions but handles it with some brilliant one-liners. Joan is there to prove to all the men that women are just as capable of tricky maths problems and code-breaking as they are. Her determination to succeed is what attracts Turing and they form a very close friendship which is perfectly portrayed by Cumberbatch and Knightly.

The film flits between difference time 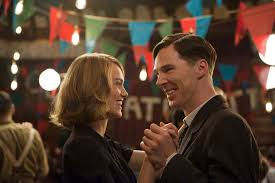 periods, from the present day where Turing is being questioned over his involvement in the war, to his story of what happened during the war, and back to when Turing was a boy at school where we see his first love for solving puzzles awakened, and perhaps his sexuality too. Though the subject is touched upon, there are no images of Turing’s sexual life, or even any relationships he may have had with other men, so we have to glean Turing’s feelings from the little we are given.

The film has many twists and turns – many people turn out to not be as they seem – which leaves you hooked the whole way through. At times you are so gripped that it is easy to forget that what you are watching really happened, but the ending leaves you with text across the images explaining what happened to Turing, and with a bang you are brought back to reality and how grossly mistreated Turing was in the wake of the incredible work he did. A brilliant film, with a brilliant cast, it’s a shame Benedict didn’t win an Oscar but he was up against some brilliant actors. However the film did win an Oscar for Best Writing Adapted Screenplay!