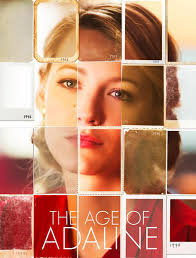 Adaline Bowman (Blake Lively) was born in 1908 and lived a normal life until the age of 29 when she was involved in a freak accident that meant her ability to age was removed. She must then spend the rest of her life moving around and changing identities every 10 years in order for people not to find out her secret. The film is set in 2015 where we see the modern day Adaline – or Jenny as she is known in this decade – working and living in San Francisco but getting ready to move on and change her identity yet again as her current decade comes to an end. However when charming (and handsome!) Ellis Jones (Michiel Huisman) arrives in her life Adaline must question whether to continue running forever or let him in and reveal her secret. Though a lot of the film is set in modern time there are plenty of flashbacks that takes us through various other decades in order to show important parts of Adaline’s life and to enforce just how long she has been running for and the struggles she has had emotionally. The costume department as well as hair and make-up were faultless in their styles as each decade is clearly seen from post-war 40’s to the swinging 60’s, but it is the modern look that will really blow you away. The gorgeous Blake Lively wears some of the most beautiful gowns and will leave you with a serious girl crush (or just a normal crush if you’re a man!). It is hard to believe that during filming Blake was possibly pregnant – she gave birth to a daughter with husband Ryan Reynolds in December of last year – as she shows no hint of a bump in those figure-hugging gowns! As well as her clothes, Blake’s performance overall was great. I can’t say I’ve seen anything with her in it before (no, I haven’t seen Gossip Girl which I know is probably really bad so sorry to 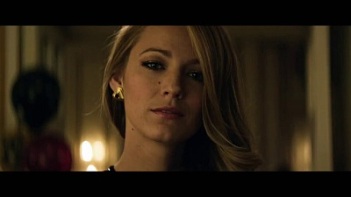 everyone who was obsessed with it!) but she is a very good actress, able to portray a range of emotions purely by staring into the camera as she does in one scene (pictured right). The only thing we couldn’t figure out though was whether she was putting on a slightly deep voice in order to show wisdom and age in a young body or if that’s just her normal voice…!

Adaline’s love interest is played by Michiel Huisman, someone who is starting to make a real name for himself. You may know him from TV series Nashville but most likely it’ll be as Daario Naharis (aka Daenerys’ eye-candy) in Game of Thrones. This is his first film as the leading man though and he doesn’t disappoint, his character is charming and funny and everything you could want from a leading man, there is even a lovely scene in which he comes out the shower with just a towel on…

For the older generation the lovely Harrison Ford also stars as Adaline’s former love from another decade, and Ellen Burstyn is Adaline’s daughter Flemming. The presence of Flemming is hard for Adaline as she has to watch her daughter grow old without doing so herself. There is one touching scene where the two meet for lunch and Flemming explains that she is moving into an old-people’s home as she is starting to struggle on her own and it is clear to us that Adaline finds this truth hard to handle. The relationship between these two characters is sweet and loving though it is a little strange to see Adaline mothering Flemming seeing as Flemming could pass for her grandmother!

Overall the film is a lovely story about letting go of the past and learning to love again even if you can’t grow old with them. Blake and Michiel are excellent together and really make the film, hopefully this will lead Michiel onto bigger and better things!