Around this time last year I was introduced to the original Netflix series Orange Is The New Black and binge-watched the entire first season just before the second was released where I subsequently binge-watched that too! The show follows Piper Chapman (Taylor Schilling) a woman living in New York City who is sentenced to 15 months in a woman’s federal prison (Litchfield) for a drug related crime committed 10 years previously. The first season sees Piper’s arrival into the prison and over the two – and now three – series we follow Piper through her sentence. Last Friday the third season was dropped to much excitement and anticipation, for the show has become a phenomenon earning itself thousands of fans across the world. This past week I have spent every spare second watching the 13 episodes in order to find out what happened to the girls after the dramatic ending of Season 2!

I won’t give any Season 3 spoilers but I will give a recap of where Season 2 finished so maybe don’t keep reading if you haven’t seen it yet! 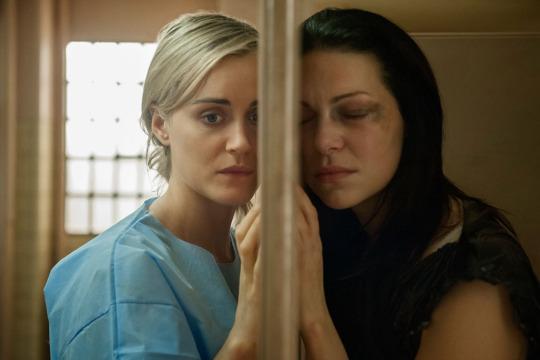 So Season 2 ended with Rosa’s escape and Vee’s death – someone who I’m sure we were all glad to see the back of! During the series Alex (Laura Prepon) had been released but Piper learns of her plans to flee the country and tells, meaning that Alex is dragged back to Litchfield at the beginning of the new season. How long will it be before Alex finds out the real reason she has returned? And how will this effect her relationship with Piper?

So much happens in this third season and it’s so hard not to give anything away! Everything we love about the previous two series from the characters to the many flashbacks into different individuals lives before their arrests are all still there. One difference is that there is more of a highlight into the officers lives this series. The prison hits difficult times as they are bought out and are now run by MCC a private company

who are making a lot of changes that aren’t going down well with the inmates and the officers too. We start to see the officers characters in a different light as it becomes clear that their jobs mean a lot to them even though they have to be the ‘bad guys’ in order to keep the girls in line. This relates especially to Caputo – the man in charge in the prison itself – who finds himself suddenly working for this private company who won’t listen to his knowledge of how to successfully run the prison. Naturally things become tough for him as the inmates and the officers complain and he finds he no longer has any power to help either.

As for the inmates themselves there is a little less focus on Piper this season as other characters and their stories take to the front but Piper’s character does go through a huge change and will leave you concerned about her future in the prison as well as how you feel about her. One character who takes the lead is Norma (the mute) who has a huge storyline that lasts over most of the series and involves a lot of the cast. Pennsatucky too has a very powerful storyline and will change how you feel about her character. Dayanara is now heavily pregnant and is starting to think about plans for her baby when it is born, something

which affects her relationship with her mother hugely. There is also a new character in the shape of Stella (Ruby Rose, pictured right) an Australian who causes trouble in Piper’s and Alex’s relationship. Only annoying thing about Stella’s character is that she’s not introduced as a new inmate instead we’re just supposed to assume she’s been there all along and just haven’t noticed her!

Like in Season 2 when Alex’s character was hardly in it due to Laura Prepon’s other filming commitments, a few characters disappear during Season 3 which is slightly annoying but hopefully they will be back next season so their storylines can continue where they left off! (It’s been announced that they have just started filming for Season 4 so we shall only have to wait another year for it’s release!!)

Overall the series is excellent though there aren’t quite so many cliffhangers at the end of each episode like in the previous seasons. It is a lot tamer compared to some of the circumstances that arose in the first two seasons but it is still both very funny and at times moving which adds up to make it a great watch. The last episode in particular is possibly one of the best with such a beautiful ending but also throws in snippets of disaster that will leave you desperate for Season 4!