Following on from the success of the two Despicable Me films Universal Pictures gave the hilarious Minions their own film! They are by far the best things about Despicable Me (and I LOVE the two films!) but unfortunately this spin-off doesn’t quite live up to expectations. Maybe it’s because they don’t speak a lot of English therefore a narration is required but it might also be because their humour is very childish and where all ages can appreciate it in small doses in the original films, here it is constant which as a girl of nearly 23 I didn’t quite appreciate as much as the children in the audience did!

The storyline follows the Minions as they try

to find a new evil boss to work for. The opening scenes show years passing with no luck until Kevin, Stuart & Bob (three Minions that are most known to audiences) decide to head into America alone and find their leader. Fortunately for them once in America they see a TV advert for Villain Con – a convention for villain’s – and so they head there in the hope of meeting the biggest villain of them all: Scarlet Overkill (Sandra Bullock).

Scarlet agrees to take them on but only if they can steal the Queen of England’s Crown Jewels. So the Minions end up in England desperate to please their new leader but in the course of stealing the Crown Jewels Bob accidentally ends up as the new King of England and angers Scarlett who then seeks revenge on the three Minions. 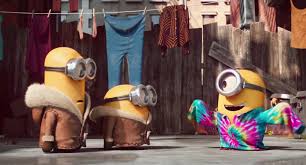 Overall the film is sweet and there are a few references that older audiences can appreciate (the Beatles for example), but I think it is most definitely a children’s film as it doesn’t have the same effect that Despicable Me 1 & 2 did on wider audiences. The voices of the characters are all done by famous faces so you will recognise them throughout, Jon Hamm, Allison Janney, Jennifer Saunders are but a few. The ending is also sweet as it introduces the Minions to a young Gru who is of course the villain they end up following throughout Despicable Me so that ties up nicely to the original films.