The film that everyone has been waiting for all year finally come out this week, the latest in the James Bond series: Spectre. After the success of Skyfall there were high expectations towards this film as well as plenty of rumours that this will be Daniel Craig’s last turn as Bond, making the latest in the franchise a must see film.

The storyline of Spectre sees Bond receive a cryptic message that sends him on a trail to uncover a sinister organisation. However he is very much alone on his mission as M (now played by Ralph Fiennes) battles political forces led by Max Denbigh (Andrew Scott), the new head of the Centre of National Security, who questions Bond’s actions and challenges the relevance of MI6 led by M. Bond therefore secretly enlists Moneypenny (Naomie Harris) and Q (Ben Whishaw) to help him seek out Madeleine Swann (Léa Seydoux), the daughter of his old nemesis Mr White, who may hold the clue to untangling the web of Spectre.

Directed by Sam Mendes (who also directed Skyfall) there are loads of brilliant camera shots. The opening sequence is spectacular as

we are taken into Mexico City and the Day Of The Dead parade. We are shown the action from the ground as well as from aerial shots (one section we are in the air looking down at Bond as he runs through the crowd, the camera is still and we just see this figure moving down below – brilliant cinematography there!). There are of course all the typical actions scenes, with car chases, epic fights and death-defying stunts, all done with excellent special effects.

Daniel Craig is still great as Bond (though Pierce Brosnan will always be my favourite!) he brings a wry sense of humour to the character and we are even treated to a topless shot during the credit sequence. It does seem like this could be Craig’s last Bond as the whole storyline is connected to his previous Bond films with mentions of past villains, and it ends with everything tied up nicely like it could be the end for him.

Ralph Fiennes is great as the new M, though no one will be able to replace Judi Dench! Ben Whishaw’s character of Q brings the humour to the film – which is much needed as it would be very heavy-going otherwise! It was great to see Moneypenny in more of an action role too instead of being stuck behind a desk for the whole film.

The villain of Spectre is Oberhauser, played by Christopher Waltz and his character is linked back to Bond’s childhood whic

h made it more interesting to watch and gave us a little insight into the young James Bond. Waltz is very good at the villain but he comes across as being a little insane rather than scary/villainous – I’m not sure if that was what they were going for though! Another brilliant piece of cinematography is given when we are first introduced to Oberhauser, a group of people are seated around a large table all clearly visible but Oberhauser is at the top in complete darkness. All we can see is his shadow, making him very mysterious (pictured).

Overall, Spectre is a typical Bond film with a predictable storyline (but then every Bond film is!). It is a good watch but unfortunately for me it just wasn’t as good as Skyfall. 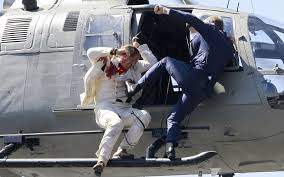 The film is also over 2 and half hours long which is a long time to be sat still! I also found it a little hard to keep up with all the mentions of Craig’s previous villains so I would recommend brushing up on them before you see Spectre! Also this Bond film seemed a little more visually violent then previous ones, at one point I had to cover my eyes and considering this film is a 12A that’s saying something! Spectre is still a good film though and I would recommend you see it if you’re a Bond fan but just don’t expect it to be as good as Skyfall!