On the 20th April 2010, the drilling rig off the Gulf of Mexico – named Deepwater Horizon – exploded and created the worst oil spill of U.S. History, injuring hundreds and killing 11. This film is the dramatisation of that eventful day. From the first few minutes where we hear one of the survivors – Chief Electrical Engineer Mike Williams – recounting what happened, you know this film is going to be one you won’t forget in a hurry. The film focuses on three key players of the day, Mike (Marc Wahlberg), Radio Operator Andrea Fleytas (Gina Rodriguez, mostly known for her role as Jane in the hit TV series Jane the Virgin) and their boss ‘Mr Jimmy’ (Kurt Russell).

Now I knew nothing of the events of that day before seeing the film but one thing is for sure and that is the company BP is completely painted as the enemy and the reason for the explosion. Whether this is entirely accurate I don’t know but coming out of the screening we all had a huge hatred for the BP men involved! Basically, because it was taking up too much time and money BP decided to forgo one of the safety checks. This was brought up by ‘Mr Jimmy’ who immediately locks horns with the BP liaison Donald Vidrine (John Malkovich) but ultimately BP are in charge and they weren’t going to listen to anyone. Ultimately this check would have stopped them from digging for oil and so the order went ahead to start regardless of Jimmy and Mike’s protestations. What happens next is a series of catastrophes that results in the explosion of the oil rig and the death of 11 men.

Cinematically Deepwater Horizon is stunning. The way they have recreated the explosions is really graphic and realistic, you will definitely

feel like you are there with them. We are constantly flipping between the action on the oil rig, to the nearby boat that starts the rescue, to the aerial view of the rig and to the depths of the ocean in which the danger begins. The film is fast-paced and intense which really brings out just how dangerous the whole situation was.

There is an amazing cast who will pull you in emotionally. Marc’s character Mike is the family man who we see Skyping his wife (Kate Hudson) and daughter just as the explosion starts. He is then determined to survive in order to get back to them, but that doesn’t stop him from helping to save the lives of many others before thinking of himself. Kate Hudson is fantastic as 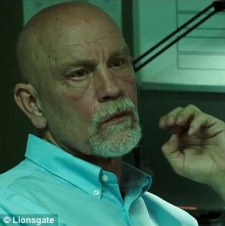 the desperately worried wife as she tries to find out what is happening. She really brings the emotional side to what is otherwise an action film. Gina Rodriguez also brings the emotion as the only female amongst the men on the rig. It’s great to see Gina in a film role and in something so much darker than her usual comedic character of Jane in Jane the Virgin. Hopefully this is just the start for Gina! John Malkovich is brilliant as the villain of the piece, you will instantly dislike him as he belittles the concerns brought by Jimmy and Mike.

Overall, Deepwater Horizon is brilliantly told. You will be gripped throughout and the visuals really are stunning to watch. It’s a fitting tribute to those involved and the film ends with real footage of the trial that took place following the incident as well as pictures of the 11 men that died on that eventful day.