With two Oscar nominations (Best Picture & Best Actress – Meryl Streep), filled with a cast of greats including Streep, Tom Hanks, Matthew Rhys and Alison Brie, and directed by Steven Spielberg, The Post is the most talked about film right now. It follows the true story of when American military analyst Daniel Ellsberg (Matthew Rhys) realizes the depths of the US government’s deceptions about America’s involvement in the Vietnam War, and takes action by copying top-secret documents that would become the Pentagon Papers. When Washington Post owner, Kay Graham (Streep) – who is still adjusting to taking over her late husband’s business – and editor Ben Bradlee (Hanks) discover Ellsberg and the complete copy of those papers their plans to publish their findings are put in jeopardy with a Federal restraining order that could get them all indicted for

Contempt. Now, Kay must decide whether to back down for the safety of her paper or publish and fight for the Freedom of the Press.

Filled with references surrounding that time in history, The Post is probably better suited to Americans and those with an interest in American history as a lot of it went straight over my head. Due to this the film was a little hard to follow and frankly I found the whole thing quite boring which should not have happened considering the huge cast involved! Tom Hanks was great, his character is clearly driven by publishing exciting stories so when they get their hands on the papers he is determined not to be intimated by the Government and fights for it to be published. You can really see this passion in his character and therefore Tom stood out the most in every scene.

You can’t deny that Meryl is a good actress, and here she has some great speeches of

dialogue but unfortunately there’s just nothing behind those speeches – whether this is actually a true representation of Kay Graham I don’t know, (in which case Meryl did a fantastic job!) – but it was all just words and in Meryl’s monotone voice it sends you to sleep! There were constant references of how Kay’s father overlooked her to take over from him, instead giving it to her husband, and therefore giving the perception to the board members that she wasn’t good enough to now be in charge. This would have been such a great angle to further explore, giving us more of a background and a connection towards Kay, but instead it’s glossed over so we hardly see the struggle she would have gone through as the first female newspaper publisher. 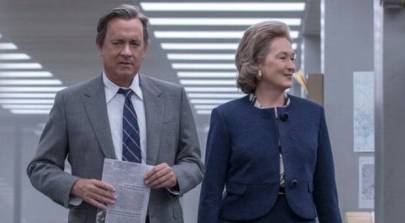 It takes some time for the film to really get going and it’s only really at the end when Ben and his team are racing to get all the information needed from the Pentagon Papers ready for press that night – all the while fighting their legal team to let them print it in the first place – that you get a sense of just what the team have their hands on. There are some great shots of the process of printing the newspaper too – but the fact that I was more interested by this than the rest of the story says something!

Overall, I was very disappointed by The Post. Maybe it had just been hyped up too much, or I don’t know enough about American history to really follow everything going on, but I felt that with such a big cast of names it would be a lot better than it is. I certainly don’t understand how Meryl got an Oscar nomination and Tom didn’t, specially as Tom drives this film and I personally think gives a far better performance than Meryl. The story line is interesting and Spielberg could have created a fantastic film with it but sadly this is not the case.