When his father dies, T’Challa becomes the new King of Wakanda – an isolated, technologically advanced African nation, but his claim is challenged by a vengeful outsider who was a childhood victim of a mistake made by T’Challa’s father, as well as from factions within his own country. T’Challa must fight to prove his worthy to rule at the same time as trying to save his country from being dragged into a world war and compromising their invisibility from the outside world. 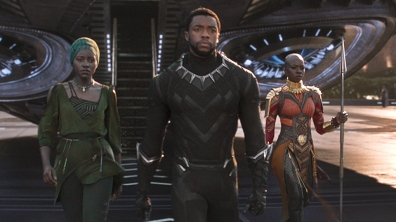 Black Panther has had the world on its feet, it is the most talked about film right now. This is down to the fact that it is the first Marvel Comics film to be entirely led by a black cast, in fact there are very few white characters at all! Being a Marvel film, it is full of action sequences and it’s great to see that the women characters are just as capable of holding their own amongst the men. This film concentrates on empowerment, from the black community to the women, it gives out a really powerful message that they are not to be underestimated, and I think it is this message that has really touched so many people and given it the response it has had.

T’Challa is played by Chadwick Boseman, who gives a very good performance as the new King who must prove he is worthy of ruling. He is shadowed by his father’s reign so must already prove he is capable of following on, whilst making his own mark as King. Chadwick portrays this brilliantly, you can see the struggles he faces as a new ruler, as well as his determination to prove his place. He faces challenges from all angles but like a true ruler only shows his weakness to those he trusts. These include his mother, his sister (Letitia Wright) – who is in charge of advancing Wakanda’s technology – his ex-girlfriend Nakia (Lupita Nyong’o, 12 Years a Slave), and the head of his army Okoie (Danai Gurira). All of which are very strong females and aren’t afraid to stand up to T’Challa and 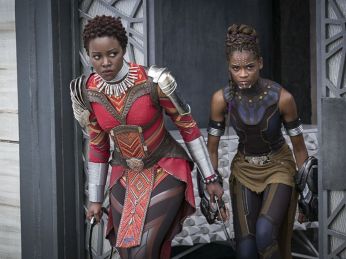 voice their opinions, but at the same time show a lot of respect for him as their new King. Nakia and Okoie are involved in a lot of the physical fights throughout and there isn’t a moment where they need to be saved by the men – instead they fight their own way through to the end – which as a women is brilliant to see, particularly as they are also portrayed as beautiful and intelligent, given us characters to look up to and respect.

Black Panther is different from other Marvel films in that the enemies aren’t really all that villainous . You don’t feel an intense hatred for them, in fact there are moments you actually feel a little sorry for them. This would be my only criticism as Marvel films are all about the enemies attempting to take over and normally there is a stand out character for you to go against, and Black Panther lacks this. The first of the enemies is Ulysses

Klaue (Andy Serkis, Star Wars) who is a wild character and has some hilarious lines! The second enemy is Erik Killmonger (Michael B. Jordan, Fantastic Four, Creed), the childhood victim of T’Challa’s father’s mistake (hard to explain without giving away a plot line) and his character is the one you mostly feel sorry for. His anger and determination to overthrow T’Challa is fuelled by his childhood hardships, and Michael gives a great performance throughout really drawing on those feelings.

Overall, Black Panther is a very good film. In terms of all the hype surrounding it, it is

definitely more about the casting and the characters they portray than the actual story line, which lacks a little but the film as a whole is still brilliant to watch. It is full of action sequences as well as humour and emotion. All the characters are very well rounded and you connect to them all. The whole cast is excellent, as well as the names already mentioned the film also includes BAFTA Rising Star Daniel Kaluuya and Martin Freeman (who unfortunately has a very annoying fake American accent which distracts me every time he speaks!). The CGI is excellent throughout and really enhances each scene, particularly the action sequences. I saw the film in IMAX 3D, and whilst it was impressive I don’t think it really enhanced the film so seeing it in regular 2D won’t be a disappointment. A great watch overall, one I’d recommend even if you’re not a fan of superhero films.