Lara Croft is a name that many know, she is the biggest female lead in a video game and redefined gender in games by showing a different interpretation as to what women can do. The success of the Tomb Raider games led to them being adapted to the big screen with Angelina Jolie in the role of Lara from 2001-2003. This latest recreation of the games brings us Alicia Vikander (Testament of Youth, The Danish Girl – in which she won her 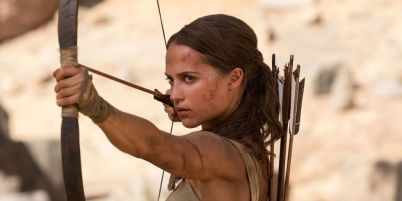 Oscar for Best Supporting Actress) as the new Lara. Lara is seen as somewhat of a sex symbol – often given a lot of unnecessary close up angles focusing on her tight clothes – but in this new age of equality and women in power, the new Lara is rightly portrayed as being a strong role model for women. She is determined to make her own way in life – not relying on her Father’s fortune, she is beautiful but this isn’t focused on, you come out the film wanting to have her tough attitude and kick-ass qualities rather than wishing you had her body and looks.

Her character is very relatable – she works as a bike courier in London, with little money and a firm belief that her missing father of seven years isn’t dead. When Lara comes across her father’s last works she believes she knows where he might be and so sets off in search of him. She is heading for a mysterious Island off the coast of Japan where legend has it the tomb of Himiko, the mythical Queen of Yamatai who was said to hold the power of life and death, is hidden underground. To reach the tomb Lara faces many obstacles – some in the form of challenges as she attempts to navigate her way through Himiko’s many forms of magical defence, and some through Mathias Vogel (Walton Goggins, Sons of Anarchy) the leader of an expedition to locate the tomb funded

by the company Trinity who wish to take Himiko’s power for themselves.

Alicia Vikander is brilliant as Lara, she easily takes us through so many different emotions as we see her struggle to accept her father’s death and then her determination to find him even when she ends up in situations that are clearly out of her comfort zone. She is shown as being strong from the start as she battles in a boxing match, so her fight scenes later in the film are completely believable. Alicia is naturally beautiful but the decision to dress her appropriately means that we focus more on her character than we do her body, making her all the more relatable. Alicia is by far the stand out of the film, she completely holds her own amongst the rest of the male dominated cast, and at no point is there the option of being rescued by a man. She is a strong independent woman who can look after herself, which is great to see and stays true to the games. There are also moments where we see her vulnerability though – in the loss of her father, and when she kills for the first time. It is here we are reminded that she is just a young girl, giving us a raw glimpse into her real self and really forging a connection with her character.

Visually, Tomb Raider is fantastic! The action sequences are fast-paced, tense and dramatic creating some incredible scenes. The film starts off slow as we are given the background to Lara’s life but once the story gets going the pace quickens. The end sequence in the tomb is incredibly tense as more and more obstacles get in the way of Lara’s escape and the special effects get even better.

Overall, the new reboot of Tomb Raider is good but unfortunately the story line isn’t all that entertaining. It takes quite some time to really get going and just when it does the pace slows again until towards the end when everything seems to happen all at once. Alicia is the only good thing about the film, her portrayal really is brilliant and the end leaves the film open for a sequel so I hope the plot is better in that one as I’d like to see more of her in this role!