Amy Schumer is huge in America right now and has slowly been working her way up over here too. I first heard of her when she appeared on The Graham Norton Show to promote this film and found her to be very funny and appealing. Since then her name has been mentioned everywhere and so I was looking forward to seeing her in action as the lead role in the film that she wrote herself and was directed by Judd Apatow (who also directed Bridesmaids and hit TV show Girls).

Trainwreck follows Amy (Schumer) a commitment phobic career woman who has to face her fears when she meets a good guy she could potentially end up with. Thanks to her dad, Amy had it drilled into her from a young age that monogamy isn’t realistic and so lives a life free from romantic commitment and instead spends most nights going out drinking and sleeping around. However when work asks her to interview sports Doctor Aaron Conners (Bill Hader), Amy starts to wonder if maybe she’s got things all wrong and being in a relationship isn’t all that bad.

As the lead Schumer is very convincing, having originally come from stand-up, Amy delivers a very funny performance which will have you laughing the whole way through. However there is also a more serious undertone

that Amy plays very well when it is revealed that her dad is suffering from MS. The pressure that this puts on her and her younger sister is huge and we see a lot of heartache from this situation. Whilst this does take away from the laughter a little bit there are still loads of hilarious moments worked around it, from a spoof film starring Daniel Radcliffe, and quite a big role from basketball star LeBron James (pictured right) – something which may connect more to American audiences! 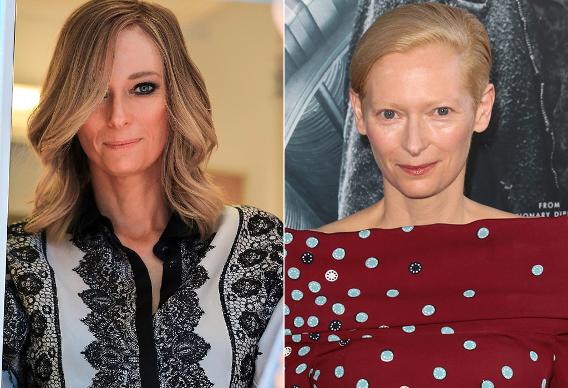 The other star of the film is Tilda Swinton who is unrecognisable as Amy’s boss. Normally pale with short bleach blonde hair, here she has been given an incredible tan with shoulder length dark blonde hair and her British accent is accentuated to make her dialogue all the more funny – for it’s Tilda that has a lot of the funnier lines. Whilst watching Tilda in this character I couldn’t help but see comparisons with Emma Thompson (an actress I adore!) I think it may have been down to some of the facial expression that Tilda pulled that made me think of Emma but I loved that from her.

As for the leading man, Bill Hader pulls off the good guy perfectly but for me personally I couldn’t connect to him as the romantic lead. Maybe I’m too used to the Tom Hardy’s and Zac Efron’s that give us a bit of sex appeal too! He is very good though and the connection between him and Schumer is very convincing.

Overall I found Trainwreck to be brilliantly written and acted, and if like me you thought it would be more American humour then you’ll be pleasantly surprised as everyone in the audience was howling with laughter the whole way through. The only slight confusion may come from the many basketball player references of which I recognised only a few, and the only criticism I would have is that the film is a tad too long. It’s just over 2 hours long and that’s not including the trailers beforehand! It’s definitely a must see though as I thoroughly enjoyed it, as did everyone else in the cinema – guys included! Hopefully this is only the beginning for Amy Schumer and we’ll start to see a lot more of her over here!